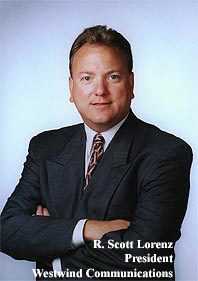 Book publicist Scott Lorenz is President of Westwind Communications, a public relations and marketing firm with a special knack for working with authors and entrepreneurs to help them get all the publicity they deserve and more.

Lorenz has conducted book marketing classes at the Learning Annex in New York City. He's been a featured marketing expert on America Online and interviewed by many media outlets both in the US and Europe about publicity and promotion, including The Wall Street Journal's Startup Journal, and French Channel 5. His clients have been featured by Good Morning America, CNN, ABC Nightly News, Nightline, TIME, PBS, Los Angeles Times, USA Today, Investor's Business Daily, Wall Street Journal, Washington Post, Howard Stern, Family Circle, Woman's World, and Entrepreneur, and many more.

Lorenz has also handled public relations and marketing for numerous doctors, lawyers, authors, inventors and entrepreneurs since 1980, and is an integral part of the marketing strategy for many clients.


Here are a Few of Scott Lorenz's Book Marketing and Public Relations Projects:

Lorenz scheduled dozens of radio, TV and print interviews for adventurer Gary Bowersox, author of The Gem Hunter, True Adventures of an American in Afghanistan. From international and national appearances on FOX & FRIENDS, Howard Stern and Voice of America to dozens of local media outlets in each city Bowersox visited in Arizona, New Mexico, Texas, Arkansas, Alabama, Florida, South Carolina and Washington DC.

On an international level, Lorenz handled the public relations effort for Kevin Uliassi, a balloonist attempting to become the first person to fly solo around the world in a balloon. More than 135 news organizations generated over 4,000 articles and newscasts worldwide during the launches and flights over a four year period.

Lorenz promoted a book called Tantalus Zero by Dr. Marshall Moore where he presented Dr. Moore as an expert in Bioweaponry. This was of particular interest to the media in the aftermath of 911. Westwind Communications arranged dozens of media interviews and invitations on both MSNBC and FOX National News.

Lorenz promoted a book from a blind author who was upset by the violence in children's nursery rhymes. She wanted to recite wholesome poems to her grandson and so wrote him a book of non-violent nursery rhymes. She wanted to have an impact on children's literature so that grandmothers across the nation could have better choices in bedtime reading for their grandkids. Lorenz launched a PR campaign that resulted in this blind poet being interviewed by numerous media outlets including WCBS-TV in New York City.

Lorenz has represented several tech firms in helping to communicate their story to the media, investors and the public. An early Internet convert, Lorenz and Internet pioneer Jon Zeeff together sent the first Christmas card over the Internet in 1995 and enabled 65,000 cards to be sent by web site visitors as part of the promotion for the Domino's Farms Christmas Light Display.

Remember Don Herbert, aka Mr. Wizard? Lorenz developed and implemented a national marketing and public relations campaign for an award-winning science series telecast on Nickelodeon called Teacher to Teacher with Mr. Wizard. He co-developed with the Detroit News a science tabloid featuring Mr. Wizard, which was distributed in elementary schools as part of the Newspapers in Education (NIE) program.

Lorenz developed and implemented numerous advertising and marketing plans for various entities owned by Domino's Pizza Owner and Founder Tom Monaghan. One in particular was a biotech firm called Morel Mountain which owned the patent on growing the once wild Morel mushroom indoors. Lorenz landed a feature in the Washington Post causing the phones to literally ring off the hook.

What? Lorenz is an animal lover and has initiated PR campaigns to "find dogs" and save horses. He used hot news pegs, such as the Kentucky Derby, Preakness, Belmont, and the Michael Vicks case to keep re-telling one client's story in the media all in a campaign to end horse slaughter in the USA. The effort landed Angel Acre's founder Jo Deibel, in dozens of interviews, a front page story in the St. Petersburg Times, features in The Philadelphia Inquirer and The National Examiner, along with an undercover story on FOX-TV in PA, culminating with an interview on ESPN.

Lorenz regularly promotes many charitable organizations and causes pro bono. Lorenz has gained insight into the needs and concerns of charity as a result of his involvement in such organizations. Lorenz was Director of the Christmas Light Display at Domino's Farms, a light and laser extravaganza that attracted hundreds of thousands of visitors and raised more than $500,000 for local charities. He served as a judge for JCPenney's Golden Rule Award, which recognizes the contributions of volunteers to their community charities.

Scott Lorenz has earned many awards for his advertising and marketing campaigns. In 1984, Michigan Governor James Blanchard named him Ambassador of Tourism for his outstanding contributions to Michigan Tourism. Those efforts included the creation of the International Plymouth Ice Sculpture Spectacular and the Mayflower Hotel Hot Air Balloon Festival, together attracting 500,000 people annually. His Canadian "$ at Par" promotion created a media blitz of his small community of Plymouth where more than $1,000,000 worth of public relations was generated for a very simple idea - accepting Canadian dollars at-par in retail shops on a community-wide basis.

In 1991 the HSMA awarded a bronze medal to Lorenz for creating one of the most outstanding hotel restaurant marketing and advertising campaigns in America for a restaurant he co-developed in Ann Arbor called "Guy Hollerin's."

Scott Lorenz is a 1978 graduate of the University of Nevada Las Vegas (UNLV) School of Hotel Administration where he served as Student Body President. Lorenz is a hot air balloonist with more than 1,350 hours as pilot in command. He's traveled throughout the United States, Japan, Canada, China, England, France, Austria and Spain participating in various balloon events. He has flown over Niagara Falls, The Great Wall of China, Disney World and the Olympics in Calgary. Married in 1979, Scott and his wife, Yvonne have two children, Katie and Joe, whose names are displayed on the side of their balloon, The Sun Pirate.


If you would like book marketing expert Scott Lorenz to handle book publicity for your book contact Scott Lorenz at: 734-667-2090, scottlorenz@westwindcos.com